Our Stories from the Ground – an interview with Abir Ghattas 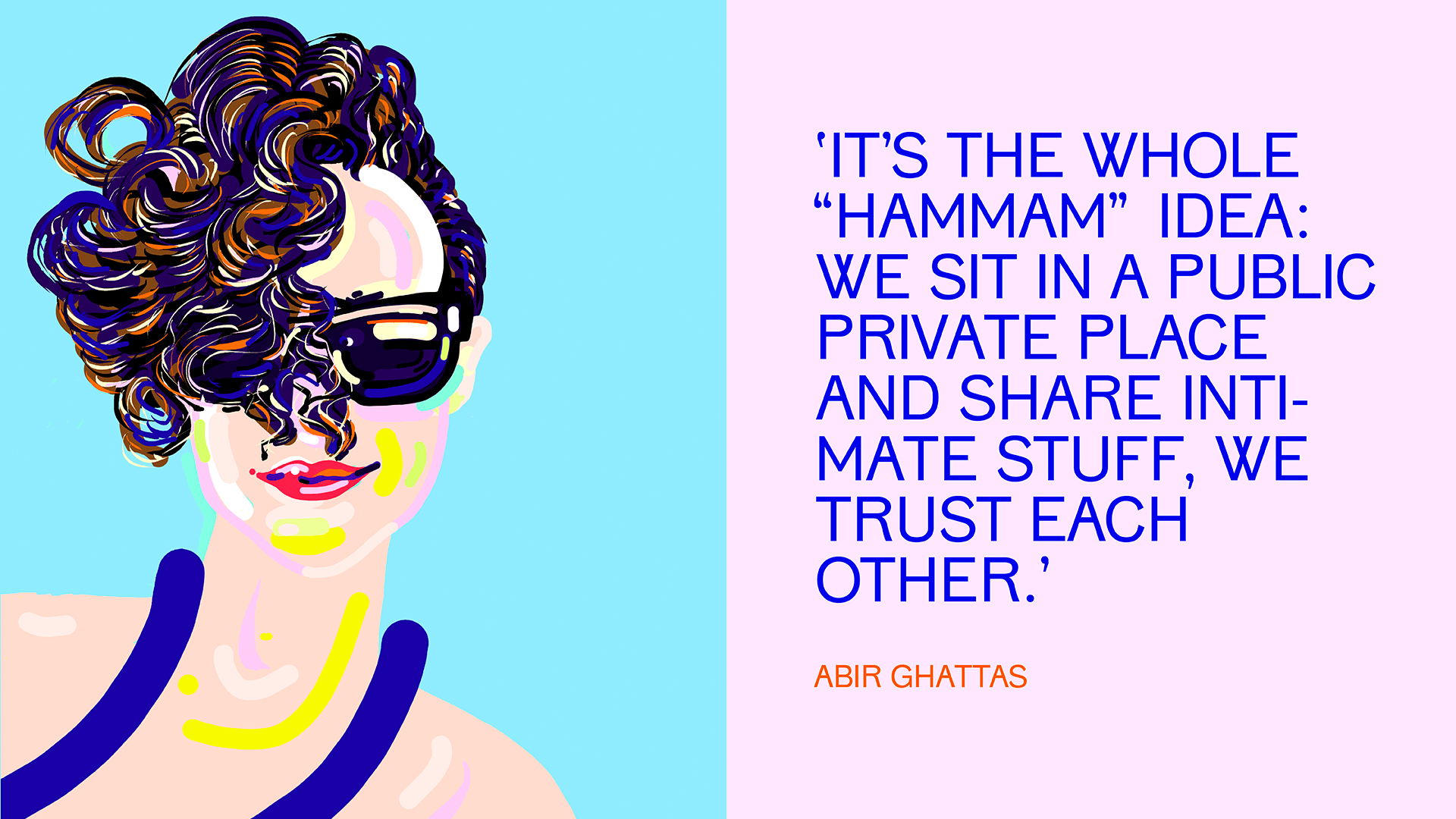 When Abir started Hammam Radio – an Arabic feminist radio station – she did so as a way of coping with the effects of Corona. She and her friends were longing for a safe, public space in which women* in all their diversity could exchange stories about their everyday lives. A place to meet, talk, participate, think, shout, cry, laugh, become angry, love, and raise their voices. Over the following weeks, many listeners joined them. Together they have been cursing, crying, singing and breaking taboos. Hammam Radio has become the home of personal stories from the ground. A place that welcomes everybody – but is owned by women*. Content notice: This interview briefly refers to the topic of sexual violence.

SUPERRR: Why did you start Hammam Radio?

Abir: If we had not had Corona, I don't think we would have done Hammam Radio. When Corona started we were like, “What are we gonna do? We're stuck and we don't want to eat our emotions – we want to speak about them.”

Abir: The original “we” was me and Rasha Hilwi. We wanted a digital home for our monthly Hammam Talks. Then Joujou and Paula, friends from Geneva and Palestine, joined us. “We” became everyone doing the shows, everyone participating online and sending us stories. The amount of messages we get! The stories are mostly from the Arab world – they are heartbreaking, they are heartwarming. So this “we” is all the women* who are engaging.

SUPERRR: You cry and you laugh on the radio. Tell me about some of these moments.

Abir: I’ll tell you one where I was crying. We had a Hammam Talks show, and our guest from Sudan just couldn't connect. So Rasha and I instead talked about our day, about work and how we felt... The day before (I’m gonna cry again now, but that's fine), I was talking to my brother about how being an immigrant is such a big part of our conversations. A lot of people don’t live where their home is. I was on a video call with him when he said, “Oh, you have a nice house!” and it struck me that my brother has never visited me. He doesn’t know my life. He lives in Beirut. I was telling them this on the radio and I started crying. It’s a sad fact I can’t be home, because I can’t be who I am there. Then all of a sudden, my phone went “Ding! Ding! Ding!” Listeners were sending me messages saying “We completely get it, we feel this.” It was good.

SUPERRR: Who is your audience? Do you know where your listeners come from?

Abir: On June 24 we’ll be 3 months old. We have about 60k listeners, which I think is a lot. We didn’t promote it, we didn’t pay for anything. The streaming software we use gives us rough demographics. The split is amazing – we have listeners in almost every Arab country. It depends on the day of course, but we have a big axis in the Gulf. Historically, feminist circles in the Arab world have been separated between the Gulf, MENA, and countries like Sudan and Djibouti. Now we have amazing listenership from the Gulf – Saudi Arabia, Bahrain, Kuwait, Qatar – and hosts from these countries. Amazingly, we have a good listenership from Germany and the US as well as from countries like Russia and Poland. And our listeners are engaged: we run a chat on the website and people talk! The stories they share are amazing. This is different to “real” radio. Whoever is doing a show on Hammam Radio has an eye on the chat and is talking to people. That’s fun.

SUPERRR: Have you connected with other radio stations that broadcast similar content?

Abir: There are no similar radio stations. Hammam Radio, a feminist radio station by women*, pushes the envelope. Last week we had our first show by a trans woman. There has never been a show on mainstream media, alternative media, whatever my ass media that was fully from A to Z by a woman, by a trans woman.

SUPERRR: The shows have names like The Great Saudi Podcast or Viva la Vulva. What’s behind those names?

Abir: I love Viva la Vulva! I started it with Loujan. At some point I said, “You know, we should really talk about the vulva.” And she was like, “Cool! Let's call it Viva la Vulva!”

Talking about your intimate parts as a woman – it’s such a broken record but it is taboo in the Arab world. People only ever talk about it in private circles. We smashed that circle, and now there’s a recording on Soundcloud where I talk about all the different sex toys you can use to pleasure yourself. Because masturbation is fucking awesome! Nobody says that, but everybody wants to hear about it. We got Instagram messages asking questions – in 2020, right!? – about shame and guilt and if it is bad for women* to want to touch themselves. I don’t need an expert to tell me this. I have sex, I orgasm. It’s the whole “hammam” idea: we sit in a public private place and share intimate stuff, we trust each other. I tell my experience – this is what we do. And it works! One woman talked about the day she was forced into marriage and how her new husband raped her on her wedding night. Not a nice story, but in the chat, people pour out their own. Everybody was like “Yeah, you're not alone.” You can talk with your friends, but you can't talk about it in a public space without shame. These spaces don’t really exist, and this tells you there is a need.

SUPERRR: What about the show 3ala balata (English: "As raw as it gets")?

Abir: Nora runs this show. She’s from Saudi Arabia and reached out saying she wanted to change the current discourse around the country. So I called her saying, “You are more than welcome to do whatever you like, but you're not gonna whitewash Saudi Arabia, right?” She said, “You're so funny, the show actually aims to do the opposite!” She wanted normal people from Saudi Arabia to share their stories and did this awesome episode about marriage. I didn't know they have schools in Saudi Arabia that teach you how to be a good wife! Now Nora does regular shows on Friday.

SUPERRR: On Hammam Radio you can hear stories from women* that you otherwise wouldn’t hear in mainstream media.

Abir:Yes. It’s our stories from the ground. They don’t apply to everyone but they are real. You might read reports on marital rape or domestic violence but you would never sit down with your friend, have a coffee and talk about your personal experience. And we need to be doing this!

SUPERRR: What are the differences you see between Arab countries when it comes to sensitive topics like sexuality and the female body? I assume that Lebanon, where you come from, is more liberal – is it?

Abir: Sure, Lebanon is more liberal compared to Saudi Arabia. But I’d say our liberalism is just make-up. It is not socially acceptable to talk about things like abortion or STIs unless it’s a closed environment. We just don't have the spaces to talk about these kinds of things.

SUPERRR: Viva la Vulva is in Arabic. Is there a shared, a common discourse in the Arab world?

Abir: Yes, we are 22 countries. Yes they are different, yes the social norms and traditions are different. However, it’s amazing how the struggles are shared, just in different variations, right? We had a show about abortion. Of course it happens in Saudi Arabia, of course it’s illegal in all of these countries, but we went and talked about it under the table. You can be gay in Lebanon, but it’s still illegal, people just turn the other eye. In Kuwait, if a woman* with short hair looks like a guy, she can get arrested. It's still the same at the end.

SUPERRR: What are the stories you are missing that you want to hear more of?

Abir: We are trying to get more migrant workers onto the show. It’s hard, because of technical skills and language barriers, but I want that. I also want more queer voices, I really think we need them. It would be good to deconstruct the narrative around seeking help and mental health in the Arab world. And I'd like to have moms on the show – but I’m very nervous about that, I don’t know how it’s going to happen.

Abir: The conversation with the team was: when Corona is over, we’re gonna close, because it is so much work. And then two or three weeks ago I was like, I don’t care, I’m not gonna close the radio!