Support for Survivors – An interview with Hera Hussain 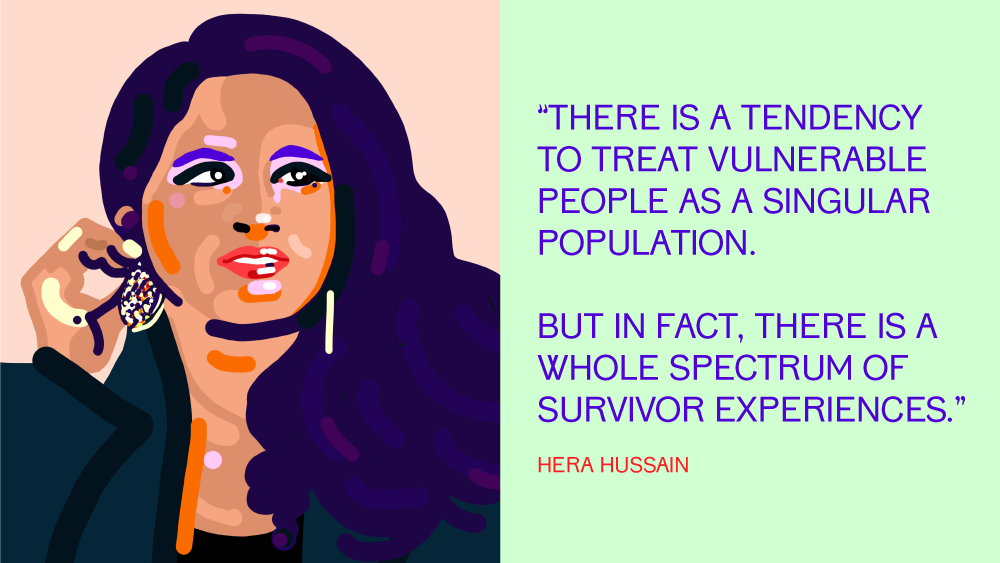 Hera grew up in Pakistan, in a society where strict moral codes govern women’s behaviour and their roles. From a young age she knew she wanted to promote women’s rights but never knew exactly how until a move to the UK exposed her to social impact organizations and entrepreneurs. In 2013 she founded Chayn – an organization that helps women experiencing abuse find the right information and support to take control of their lives. Over the past seven years, Chayn – which in Urdu چین means ‘solace' or 'peace of mind' – has reached over 380,000 people.

SUPERRR: How do you explain Chayn to someone who has never heard of it?

Hera: It's so hard! I’ve gone through so many iterations. For years, no one could make sense of it. Chayn is a volunteer community that creates intersectional resources for survivors of gender-based violence around the world. We provide things that survivors search for online – support, information and tools to help them recover and live happier and more independent lives.

SUPERRR: What made you start Chayn? What gaps did you see, and what gaps do you still see now?

Hera: I started Chayn because I helped two close friends get out of abusive marriages – one in Pakistan and one in the UK. In the process I searched a lot online. What laws applied to them? How does child custody work? How does a domestic abuse case affect immigration status, how do you get free therapy? The biggest difficulty was that we couldn't understand how to collect evidence of domestic abuse. One of my friends got legal aid but the lawyer could only help so much. We had to find creative ways to collect evidence and documentation. Throughout this process we scanned about 200 organisations’ websites. Many were completely inaccessible – really old and designed from an organizational perspective. "This is our CEO giving a speech at a gala," that sort of thing. Users quickly got lost and that really put me off. I wanted to do something about it. “Why can't these websites and services be redesigned around survivors' experiences and needs?” I thought. That's how Chayn began.

SUPERRR: What other issues did you come across when looking at materials for survivors?

Hera: There is a tendency to treat vulnerable people as a single population, to focus on the extreme end – someone will die if they don't get help right now. But in fact, there is a whole spectrum of survivor experiences based on their background, what is happening to them, what challenges and resources they have. Nuance and project and product design is missing – it's a big gap. Another gap is that we're still living in the “appification age”. People don’t question whether formats work for users. For example, six years ago, everyone was creating rape alarm apps. There were so many! Most don’t exist now – they are not as useful as you think. Thinking about the diversity of survivor experiences is really missing. In the beginning our design was very typical – with sad pictures – until we realized this really puts people off. Just like a restaurant or cafe, you want to create a certain atmosphere so that people’s mood changes when they come in. We don’t want to traumatise; we want people to feel they have agency, choice. The user design builds trust and is empowering. It tells it like it is, but shows how things can be different. Designing for plurality is so important – this is what sets Chayn apart.

SUPERRR: When you say “designing for plurality”, what is it you are offering with Chayn?

Hera: We do guides on a range of topics, like "how to build your own domestic violence case with a lawyer” and “how to stay safe online". Our full online guides can be up to 50 pages long. People can download them or go through them in their own time. We have platforms for people in the LGBTQIA+ community and are growing our digital services. We have a chatbot and just launched a remote trauma support program. We tailor our content to the different needs of the people who seek support on our site. Someone living with an abusive partner might want short course lessons with a fake subject line at a time of day when it's safe for them. We don't force people to sign up for an account, they can browse freely and everything is open. That goes against all design rules – why have a sign-up when all the content is open? Our trauma service is more in-depth. The intensity of interaction varies – as does content type – because some things will work for some people and others will need something else.

SUPERRR: Who are the people behind Chayn and its resources?

Hera: We have around 400 volunteers from 20 countries. We allow 30 to be active at any given time. People can tap in and out. Up to 70% percent are survivors of abuse or people who helped someone close to them. This means a lot of our work is survivor-led – being part of Chayn should be empowering in itself. Given that we’re a survivorhood organisation you’d think we’d always be talking about people’s experiences, but it only really comes up during work.

SUPERRR: You mentioned your newly launched remote trauma support, Bloom. What can people expect? How does it work?

Hera: People get two videos every week and homework – self-reflective exercises to build life and recovery skills. They can talk to our team about each session and their ideas are incorporated into the next sessions. Participants stay anonymous but through these feedback loops they get input from others who know they are there. It’s a virtual support group. By the end of each course we want people to have a better understanding of the impact of trauma, their feelings about it, why it happens and what they can do to recover. But also to be able to move forward with their lives and not let the trauma define them.

SUPERRR: What feedback do you get from people using your tools?

Hera: We got a message from someone on Chayn India saying they had been trying to understand divorce laws for two years. They kept coming across forums run by male lawyers talking about how women misuse these laws so she couldn’t actually figure out what her rights were. “Once I found you,” she said, “I was like: I know what I can do now.” The messages we get from people on why they’re signing up to Bloom are just heartbreaking – people who have no one to talk to or feel like no one cares about what they are going through. It really shows how important things like this are: a space where you feel safe to explore the impact traumatic experiences have had on you, and how you can cope with and recover from them so they do not define the rest of your life. The feedback has been amazing. A lot of people can’t afford therapy or have stopped because of the lockdowns. People take our course in trauma resilience and say that they finally understand the impact that being in an abusive environment has had on them. They find the confidence to draw boundaries. They use our service to power through large decisions in their life. That’s the kind of transformation we’re seeing.

SUPERRR: According to the UN, one in three women experiences some form of gender-based violence in their lifetime. It’s an enormous problem across the globe. What systemic changes do we need to bring these numbers down?

Hera: Unfortunately these are structural problems. Patriarchal norms are to blame for that – how we treat gender roles, how we restrict options for survivors. Even the very basics: people don’t think it happens – don’t believe the numbers – and when they do, don’t think it happens around them. It is uncomfortable, so they choose to ignore it or blame the victim. There are so many societal problems we have to root out. I’m thinking of toxic masculinity – why are men brought up to believe they have ownership over women’s bodies and that their own position in society is tied to someone else’s gender? We cannot achieve gender equality unless we tackle a two-fold problem. The root is burning down patriarchy – just that! [Laughs] The second is holding people accountable. People have got away with child abuse, domestic abuse, forced marriages, rape, murder, femicides for hundreds of years. We’re only now starting to see a reckoning.

SUPERRR: Thinking about systemic change and intersectionality, where do you see gender-based violence intersect with other areas?

Hera: From strong government to the rule of law, across class, sexuality, race, disability, post-colonial cultural norms and legal justice... There are so many intersections. But poverty is a big driver of a lot of this, actually. It is a huge problem that Chayn isn’t equipped to help those who don’t have access to the internet. But for the people we support, some of the biggest barriers are unequal access to money, jobs, bodily autonomy, the right to marry whoever they want. Even legal justice is so problematic that feminists are saying, “let’s use the word injustice”. This is how bad the experiences of survivors are across the globe. Our laws and systems do not recognize the humanity of women, those with marginalized identities – whether you are in a same-sex relationship, a migrant, or trans.

SUPERRR: What is your vision for Chayn and the next steps?

Hera: I would love to work on trauma-informed services to support survivors, especially for those who can’t access in-person support in countries where these don’t exist. Also to share Chayn’s way of doing things, using technology ethically. That could help a lot of organisations which are looking to transform. Basically, supporting them in learning from our mistakes and our successes to provide more in-depth support to survivors. However, because of the economy I suspect we are going to see a decline in funding for charities and it’ll be even harder to get support.

SUPERRR: What if people reading this would like to support the work of Chayn? Do you accept individual donations?

Hera: Yes totally! We have Paypal and are part of the Github sponsors program.

SUPERRR: Thank you so much for the conversation and keep up the good work!