The CryptoRave in Brazil – An Interview with Elisa Ximenes 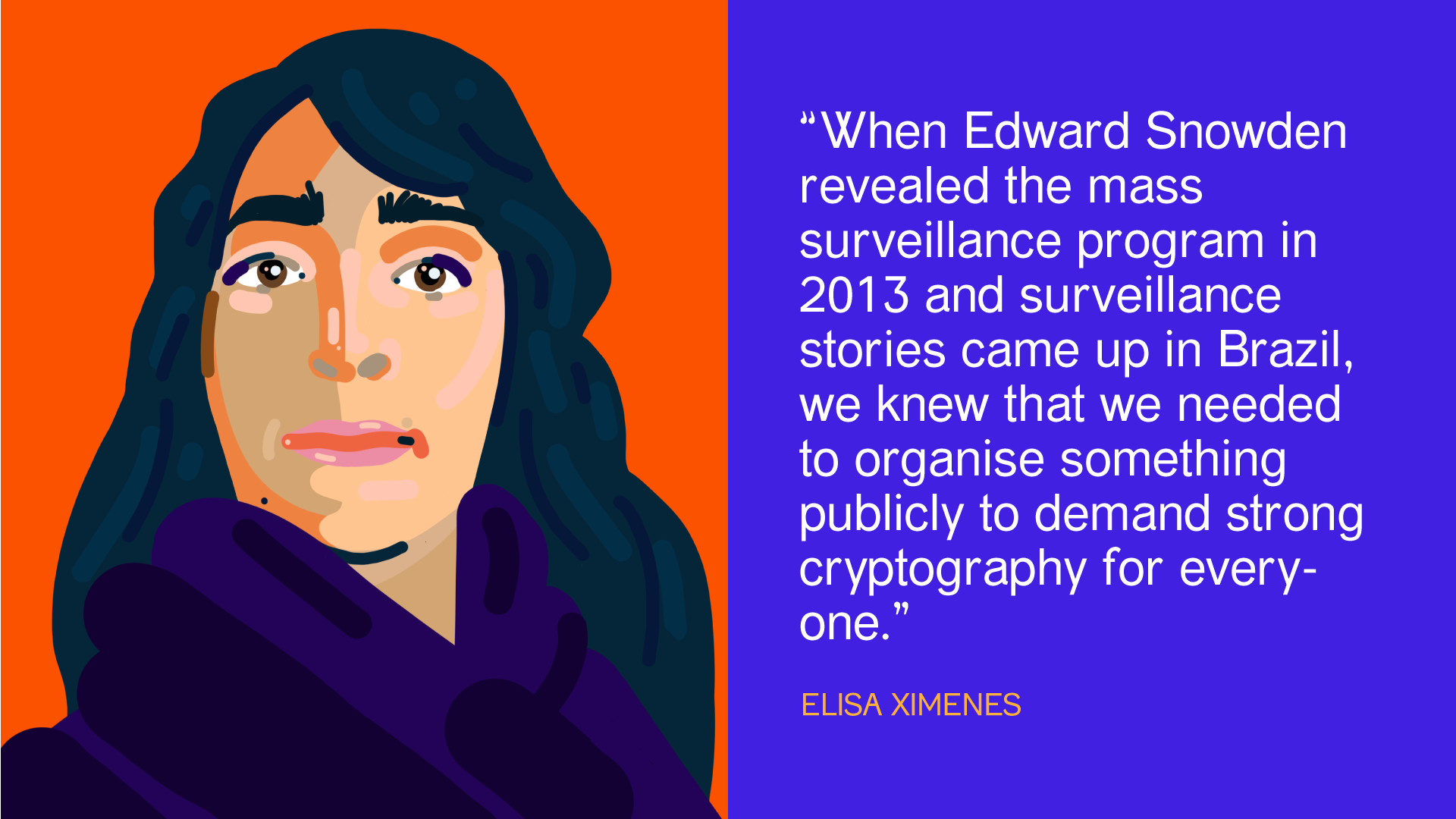 CryptoRave is an event that holds 24 hours of talking, exchanging learning about communication security and encryption which happens every year in São Paulo, Brazil. It is the biggest open and free event of its kind in Latin America. Every edition attracts more than 3000 people: hackers, activists and cypherpunks from different parts of Brazil and people interested in learning more about safety practices and personal data protection. We spoke to Elisa Ximenes who is part of the core organisation team behind CryptoRave.

SUPERRR: How did you come up with the idea of CryptoRave?

Elisa: It is inspired by the international CryptoParty movement. Some of us use digital security tools like GPG since the beggining of 2000s to communicate in a secure way with other activists around the world. The issue was that only a small group of dedicated and tech-savvy activists was communicating with those tools, so keeping and sharing private information was difficult or even excluding people. Around 2007, we started to run workshops for social movements and collectives about security and we also created resources about digital security in Portuguese. But it was still difficult to spread and advocate for security culture and privacy. During the security workshops, some people would believe that we were paranoid and such surveillance wouldn't be possible. That changed when Edward Snowden revealed the mass surveillance program in 2013 and several actvists surveilance stories came up in Brazil. We knew that we needed to organise something publicly to demand strong cryptography for everyone. It was an opportunity to open the security debate to society. So why not create a public event? That same year, late in 2013, we organised the first CryptoParty in São Paulo. Around 300 people attended the event, which made us excited about doing something bigger.  Months later, the new mayor of the city of São Paulo was implementing a program of opening public spaces like public libraries and social centers to be used 24 hours. Some of us thought that it would be a great idea to do a cryptoparty, but instead of lasting just for the afternoon, it should go over 24 hours, and instead of approaching just OTR, GPG, Tor, we should open a whole schedule with debates, workshops and also a party. We unsterstood then that it could make privacy and security attractive for everyone.

SUPERRR: And who comes to CryptoRave - and why do they take part?

Elisa: In the first year we were really insecure about it, and we were expecting 500 participants, most of them activists or students of technology. But then we had around 1500 people and over 24 hours of activities at the social center! It was amazing to see how many people with different backgrounds showed up.  CryptoRave has a public Safe Space Policy. Since the beginning we wanted to make an event that respects and embraces minorities and anyone. We know how tech events are predominantly white, cis, and male, so we wanted to avoid that and create a more inclusive and diverse event. In the first year I gave a workshop called "GPG for women". The idea was to have a safe space for women that didn't have any contact with the topic and make them feel free to raise their hands and ask questions. But then some men decided to participate and it wasn't the way we expected. So the next year on we decided to create a space called Ada Lovelace to receive workshops and discussions about gender and technology. It has been a big success! We encourage and invite women to subscribe on the Call for Activities, and this increased the presence of women and also trans, queer and non-binary people in the event.

SUPERRR: You have organized several CryptoRaves now. What has changed, or what have you learned?

Elisa: We have learned a lot over the events, like how to organise and work with volunteers, how to create a diverse schedule and event, and even how to organise a party.  We always try to make the event on a public place such as social centers, because we believe that hosting such event and discussing such topics is of public interest. But things are getting really hard the last years. With the mayor change at the city and now the conservative changes in Brazil, we had to jump from one place to another due to political problems and also there is a lack of space for such an event that needs to safely gather around 2000 people. We're a small group of 10 people in the organization. The core organization now has more women than men, which reflects directly on the event: on who we're going to invite as keynote, for instance. Besides our gender concern, after two years we unsterstood we had to built racial diversity policies too. Every year we learn something new and we try to bring it to the organization. We are including the most dedicate volunteers on the core of the organization, which refreshes and strengthens the organization.

SUPERRR: I'm sure you have some funny or memorable anecdotes that happened at CryptoRave that catch its spirit. Can you share one with us?

Elisa: We have a lot! On the second or third year of the event I was on the reception desk and a mother arrived with two kids, 13 and the other 16 years old. CryptoRave was on the day before Mother's Day and the younger child wanted to go to the event. So she took a bus from the country side around 1 hour away from São Paulo with her kids. We make CryptoRave T-shirts every year. In one of the first years two students that didn't know each other met at their university restaurant wearing the same shirt. They started talking about CryptoRave event and then created a studies group that is still going on until today and every year they submit proposals to the event. In one of the editions, we decided to partner with some DJs and artists. The CryptoRave's party usually happens from friday to saturday. The event was taking place at a social center and the music was freaking good. We saw some random people parking the car just to jump in the party. That was funny.  There's also all the crowdfunding experience which is an unique drama & roller coaster of feelings. In one of the editions, in order to help us, some volunteers did the "capybara of crowdfunding", a capybara meme (in ascii art) that you could use to share on groups and social media to ask donations to CryptoRave. We embraced the capybara meme and it's now our mascot.

SUPERRR: How has Covid19 impacted the event? Do you plan to do a virtual CryptoRave from home or something similar?

Elisa: The country was very badly impacted. The federal govermment didn't take any measure to control the virus and we are doing light social isolation since March. It's basically impossible to host an event for 3000 people on that conditions, so we had to cancel the event for 2020. But we have plans on doing some activities online.

SUPERRR: With everything that's going on right now, Covid19, the political situation etc: Do you have a plan for the future, or a goal or wish? And is there a way that people can support you reaching it?

Elisa: We were working on our crowdfunding campaing when the pandemic arrived. We decided to freeze our campaing and ask people to donate for social projects that could assist people on vulnerability situations, which is most part of our society, considering that a lot of people lost their jobs during the pandemic. Our campaing is still online and receiving donations. In times like these we see the importance of events like CryptoRave, since governments are using the pandemic as an excuse to increase the surveillance apparatus and have already implemented a lot of mechanisms of control of the population. Our goal is to keep the event going to spread the word about our digital rights and how to fight back against mass surveillance.

SUPERRR: Thank you so much for sharing your experiences and good luck for the next CryptoRave!