On The Future of Memory 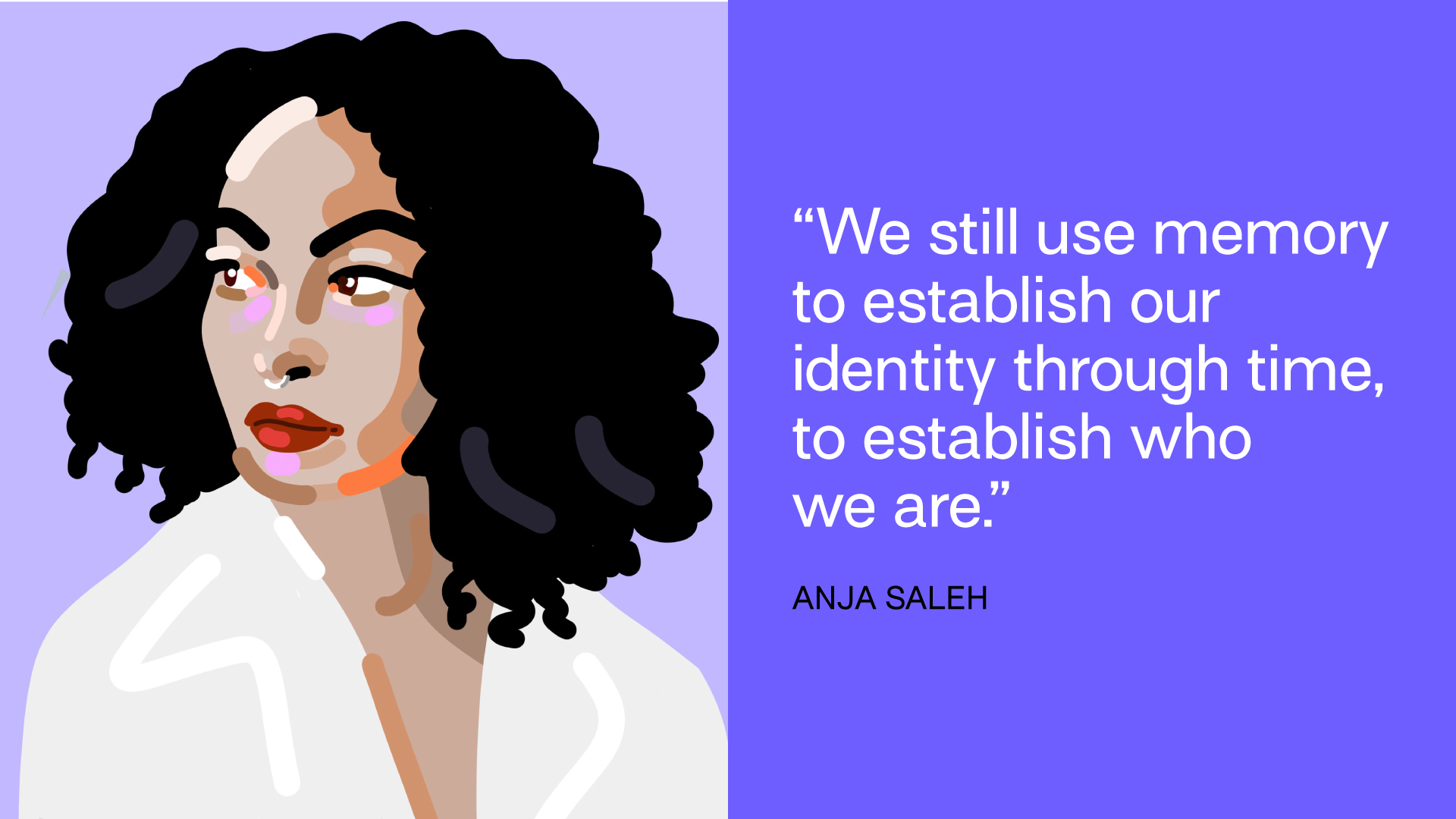 Anja Saleh is a cultural advisor, artist, poet and author of “Soon, The Future Of Memory” her first full-length poetry collection published in June 2021 with Edition Assemblage in Germany. Educated in political and social sciences, Anja Saleh’s research and art focuses on the culture and politics of memory and its meaning for the future.

SUPERRR: Dear Anja, your first full-length poetry collection, “Soon, The Future of Memory”, has just been published. The poems within it concern memory, the future and language – can you tell us more about how you bring these aspects together and the meanings behind it?

Anja: Such a big question! Our lives are completely shaped by past knowledge and ancestral knowings. Everything we know and do is based on that. So much that we know of this world is based on memory – and it’s not our memory. The future will look no different: everything the future generations will learn and know is based on memory, except by then, our memory will have become part of it. That for me means that we are transcending the future as memory. Hence the title, “Soon, the Future of Memory”: I am talking about us. It’s nothing fancy. I know that thinking about our memory is often merely connected to decolonization, but that for me is focussing way too much on cleaning up the mess others made. It is not our sole purpose, although often times it comes with existing as us. I am skeptical about decolonising what has long been colonised and we cannot necessarily go back to the past. There are things which have already been lost. We need to move on [to the next strategy]. That being said, I am a firm believer in the necessity of the awareness of decoloniality – now and in the future. But the future is the only not yet colonized space, the only space which holds the possibility of being free of colonization in that sense.

SUPERRR: Do you have a specific imagery in mind when you say “the futures aren’t colonized yet”? What do you associate with that phrase?

Anja: I think we have to focus on decoloniality and decolonising as an action but I also believe that we are focusing on the wrong time. Looking back is relevant in order to understand the present but I feel like sometimes we get caught circling around what has been, forgetting what is and therefore losing focus on what can be. What I mean by this is that we need to focus our decolonising on the present in order to move into the future without this amount of harmful, “infected” knowledge and perspectives of the world. If we leave that here, which tomorrow will be yesterday, if we move on with clarity, then we can start to scratch the surface of disrupting the many colonial continuities. Our memory being one of those continuities btw.

SUPERRR: It’s incredibly fascinating how you bring together these different perspectives. So, with your thoughts on the pasts, presents and futures, what role does poetry play for you individually and in your political work and processes?

Anja: It’s my practice rather than the art, because art to me feels like it focuses on the outcome and what I deem most relevant are the process(es). I am trying to raise questions, because I have so many! (Laughs). I want others to question and wonder, and through my questioning, maybe even ask further and different questions. I want to look differently at colonial continuities, translate them into my artistic and/or political practices – doing this works best by questioning for me. As I shortly mentioned before, memory for me is a colonial continuity because of who determines what we remember. Our memory usually is not self-chosen or self-made, we were dictated what to remember and what to deem irrelevant. There is a memory to memory, a memory besides memory, a memory parallel to memory, right? And it’s impossible to find out about these memories – there are so many memories we need to re-member, re-collect. It’s such a hard task and we won’t get any further without questioning where we are and what we have right now. That is one part of it: raising more questions. But also, the arts and politics inform and inspire each other constantly. They are not detached from each other as we might believe them to be.

SUPERRR: Really interesting. I read you are writing political op-eds on memories, too. So how would you envision futures in which memories and how we remember are different?

Anja: Some people see “Soon, The Future of Memory” as a threat and to others it’s just a fact, again others an announcement. The digital sphere plays an enormous role in this because it becomes so much harder to silence the people who have been sidelined all those years, over centuries, really. There has always been someone who was not heard. The probability of that has become smaller, yet of course many are still not heard. We speak up, we write books and papers, we make music and create art and it lives through us. Now, the future is our playground. We can now dictate what shall and can not be forgotten. For example, I think of my Nubian roots, I grew up not even knowing about them. They were erased from the dominant cultures we were socialized in. But then there is something linking us to them, one small thought, memory, one person, one tradition, and it will always be like this. It is so much harder to erase us, our realities and heritages. Like tomorrow, we have the second anniversary of the Hanau Massacre and we will not forget or let anyone else forget about it. Digitalization plays a huge role in this. Who knows what would have been known or not known if it hadn’t been shared on the internet and social media, if it hadn’t been documented like that. Would we be able to hold institutions, governments, people accountable? Maybe not.

SUPERRR: It resonates so much, especially when thinking of Hanau. I think of the memories by which we produce ourselves. In this case, it wasn’t the dominant society who wanted Hanau to be remembered …

Anja: Yes, exactly. It was the families, the loved ones, the survivors of the massacre, the wittnesses. Their narrative is what we need to focus on. And not the dominant narrative, the one in which people say they “don’t understand how this could happen”. But they let it happen, they left the families alone –they still call it Einzelfall. There’s a sentence I scribbled down in the process of writing the book, it goes “We still use memory to establish our identity through time, to establish who we are.” How one thing leads to the other and basically creates us. Also for ourselves, it does not only create our self-perceptions. It creates us in our minds: who I am right now is just an accumulation of memory at the end of the day. Being able to name all the things I am is based on memory, based on knowledge that wasn’t even produced by you or me, but by many before us and around us.

SUPERRR: You’ve spoken about your Nubian ancestors and how they survived. What do you think about the sentence: to remember means to resist.

Anja: I am still here, my mother is still here, my grandmother was here. They survived so many things without anyone knowing – or caring. But someone somehow collected all the fragments and was like that's their history. To remember what you find important beyond what you have been dictated to see as such – that too is resistance. There are so many layers to this sentence.

SUPERRR: So learning from the pasts and the presents in order to navigate through the futures, right? What you said for me makes it more and more clear how everything is interwoven.

Anja: Yes, absolutely. We look in the past, we learn from there, we execute it now and this will inform our future. There will always be something new, a uniqueness. And that’s part of it. Kind of part of the deal of existing on this planet. (Laughs)

SUPERRR: As the excellent writer you are, would you like to share a poem of yours with us?

Anja: Sure. Shortly about the following poem: It is a numbered poem and will mean a thousand different things to a thousand different people. Memories are not linear and so aren’t my poems. It might look chaotic or confusing and you may miss aline, have to re-read or jump to another line but that is exactly how our brains work, too. We never remember precisely. So, here goes “unnamed”.

SUPERRR: Thank you so much, dear Anja! Wishing you all the best for your upcoming projects – and here’s to future memories!