Building worlds and homes – The New New projects, one year on 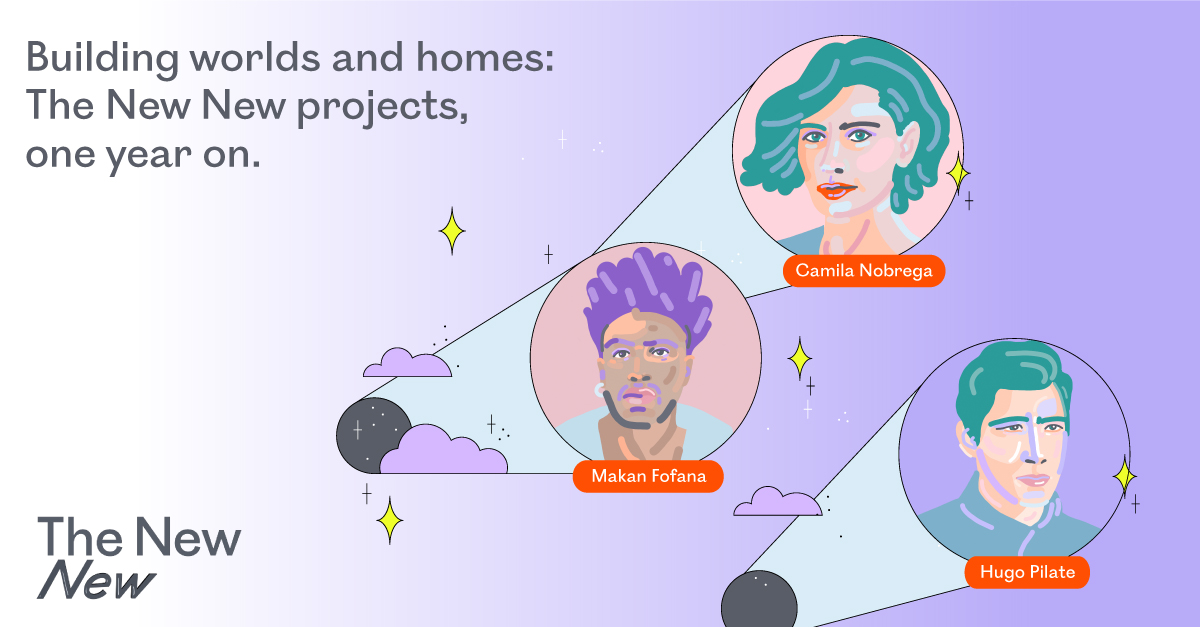 Last year, The New New brought together 24 artists, technologists, thought leaders, writers and designers from across Europe for a six-month fellowship on visions for an inclusive digital future.

The Bertelsmann Stiftung and Superrr Lab are continuing to work with four of the 12 projects to enhance their impact and assist with networking, fundraising and outreach.

Today, we’re talking to the people behind two of those projects.

Combining investigative journalism, academic research and artistic languages, Camila Nobrega’s Beyond the Green strengthens narratives around social-environmental justice by exploring feminist perspectives on the megaprojects that affect our lives, bodies and territories.

Makan Fofana and Hugo Pilate’s Banlieue du Turfu aims to overturn widespread and persistently negative conceptions of the French banlieues by crafting an imaginary that revels in their nonconformity and reveals them as crucibles of creativity and untapped potential. Through school workshops and public jam sessions, Makan and Hugo are creating within the video game Fortnite a collaborative and immersive world that underpins and informs their project’s vision.

SUPERRR: Thank you for taking the time to talk to us today! Could you update us first on the current state of your New New project?

Camila: Beyond the Green has a new home, beyondthegreen.media. This home is being organized according to the content I have already produced, including the results of partnerships that occurred in recent years, and I am now discovering how many rooms this house will have, adjusting objects and ideas. In that sense, it is also a repository. With this website, I am making space for what has happened so far as well as creating a place to receive new content. So this is Beyond the Green’s status at the moment: taking care of the house and strengthening its structure so it can sustain the next steps. The same can be said for the partnerships planned for the new phases, which will develop exchanges and joint research-investigations on social-ecological transformations from feminist perspectives.

Makan & Hugo: After The New New fellowship, our project continued to grow and we ran a series of four workshops on the imagination of the Banlieue du Turfu. Through Fortnite, we were also able to launch other collaborations on a larger scale. These took the form of ten peer-learning sessions organised at the Gaîté Lyrique on the proposal for an alternative metaverse called the Agoravers, artistic residencies on audio-visual production, and access to a two-year European grant to translate our prospectivist practice on Fortnite into a pedagogical tool. After a rather intense year, we are now looking to define a strategy and a more stable economic model that will best unite our skills, our desires and the opportunities we encounter in the field.

SUPERRR: What has changed since you began the fellowship last year? What new paths have opened up and how have your initial assumptions evolved?

Camila: The best thing about the fellowship was having the chance to improve the narrative of the project. The idea had already existed for years, guiding my work and the content which developed through partnerships, but it still didn't have a very clear structure. I had different investigative journalistic projects and research projects in various formats, ranging from academic research to video explorations, and a lot of writing. But the material lacked a space – a home – in which to bring together their trajectories that were already united by a shared, invisible gravity. Now this common force is becoming more visible, both through the narrative from which the project grows and in the establishment of an online home for the material.

The mentorship I had during the fellowship from the amazing Brazilian designer Kelly Saura was essential in this process. Working on the project’s visual development was almost a kind of therapy for Beyond the Green – through it, the project could understand its own path, come to terms with its identity crisis and finally rebuild itself. On the other hand, I had to step back from the video editing that I thought in the beginning would be the priority. Without this house, this strong structure, there was no point in making videos that would be released to a kind of isolation. I changed my priorities and have no regrets.

Makan & Hugo: The fellowship allowed us to share our workshop offer and it is from those very workshops that we subsequently developed the Agoravers. The format of our workshops has also evolved as we have absorbed and responded to the demands of different actors: the System D Festival, the Gaîté Lyrique, the Agora de Nanterre, as well as our vision of the world.

Makan: I wouldn't say that our hypotheses have not been validated, but rather that practice has allowed us to iterate our initial hypotheses. For example, I thought of building the society project in a workshop, but it is too complex. I thought co-creation was the right formula to generate creative solutions in-situ, but it isn’t always the case. I also thought I really liked workshops, but now I want to follow a more artistic direction.

Hugo: Yes, we did indeed ask ourselves lots of questions concerning the place of worldbuilding in the workshops and people's interest in it. We realised quite early on that the type of participants we were attracting were more interested in inventing stories within the world of the Banlieue du Turfu than inventing the world itself, although the line between the two activities is often ambiguous.

SUPERRR: Who would you like to work with in the future and what successes would you still like to achieve?

Camila: Journalists, researchers, artists, feminist and queer activists, ecotransfeminists – I want to work with people who are equally obsessed with tracing the chains of power that underpin socio-environmental transformations. As I don't have a single identity myself (and nor do I intend to reduce myself that way), I will continue to nurture the partnerships I already have that work at the borders of these disciplines and across different formats, while continuing to seek out new ones. Critical and multiple perspectives are essential, so contributing to spaces of exchange and collective production on these themes through texts, videos, photography, workshops and other formats is my main goal.

Makan & Hugo: It’s clear to us that this project will evolve more as an art studio over the coming year, so strengthening our ability to connect the creative industries to local policy issues is a big challenge for us.

Hugo: For me, I would like to develop our practice through different partnerships to better understand the impact that it, and similar approaches, can have on frugal prototyping, narrative power and digital tools.

SUPERRR: Can you share with us three learnings you have experienced in the course of your project or the fellowship process?

Camila: Sure. Independent projects always need more time than we plan, because they usually start from time and energy we give before we have a sufficient financial structure in place. Patience and persistence are necessary. Pausing to avoid freaking out is also part of it. Securing the structure as much as rethinking the project can sometimes be more important than following the path you initially outlined but which may not always lead to what really makes sense. Finally, combine flexibility with consistency. For me that means having the space to open new doors and pursue novel ideas, but without the risk of becoming lost in too many things at the same time.

Makan & Hugo: We adored working with Yuvraj Jha, the artist who helped us visualise the Agoravers, and learned a lot. We increased our knowledge of the metaverse and its potential impact on societies and I learned to talk about the project in a less poetic – but more accessible – language for potential partners.

SUPERRR: Thank you so much for these insights into your projects and all the best for the next steps!